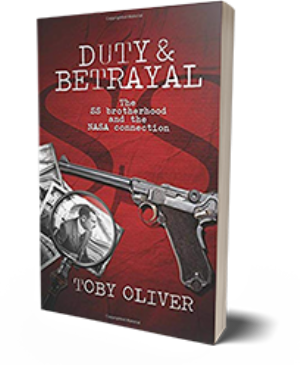 In 1962, the Western powers’ leading scientists meet in London for a conference. A notorious Nazi war criminal is after an attendee from NASA who once worked on Hitler’s rocket program. But CIA agent Jack Stein will stop at nothing to protect him. Meanwhile, Stein’s loyal friend and intelligence source, Spencer Hall of MI5, is consumed with a personal vendetta. Soviet KGB and Israeli Mossad agents are in town too, and the secrets they’re after are nuclear in more ways than one.

Toby Oliver’s latest thriller, Duty and Betrayal features popular characters Jack Stein and Spencer Hall allowing the readers to follow up on their lives after the events of A Spy Amongst Us. It’s highly reviewed on Goodreads and available from a variety of online platforms including both e-books and physical copies on Amazon.

This work combines Oliver’s knowledge of World War Two and the immediate post-war era to bring this carefully interwoven drama to life. As exciting as it is suspenseful, Duty and Betrayal perfectly portrays the atmosphere of the time: uncertain and shaky peacefulness.

The plot is an intriguing web that is suitable for history buffs and complete novices alike. A deeply character based plot with espionage at the forefront, Toby Oliver’s newest novel is something you certainly won’t want to miss.