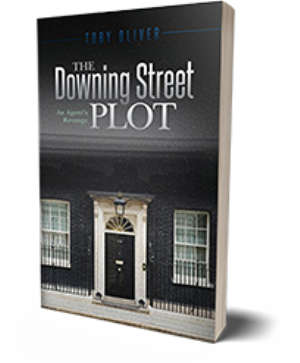 There’s a professional killer gunning for Britain’s Prime Minister, and it’s up to the head of the British Security Service and a top CIA agent to stop him. MI5 Director Spencer Hall and CIA agent Jack Stein go way back, so when Stein tells Hall there’s a plot against the Prime Minister, he knows it’s legitimate, and isn’t the least bit surprised to learn the KGB’s behind it.

Hall must bypass usual communication routes and put increased trust in Jack when he learns of an assassination plot against the British Prime Minister. The plot’s KGB-hatched, but the assassin’s possibly homegrown-meaning Hall doesn’t know just how close the assassin is to the target. As they realise the killer may be a current or former British agent, Hall and Stein must put together their own close-knit team to crack the case. It’s not only Spencer’s career on the line. It may be his own life too.

Featuring Spencer Hall, a popular character with those familiar with other Toby Oliver Novels, The Downing Street Plot is a fast-paced thriller with surprises on almost every page. It’s highly reviewed on Goodreads and available from a variety of online platforms including both e-books and physical copies on Amazon.